Handling Lack of Support from Friends or Family

So, first things first for a bit of context!

If you haven’t been following my stories on social media then you won’t know that a few weekends ago was an absolute disaster at the Pure Elite show in Margate… but with ALL the lessons learned that weekend (there were many!) I picked myself up, dusted myself off, and 7 days later I got back on stage and came home with 3 trophies for every single one of my categories, placing 2nd twice and earning my pro status with Miami Pro! 🤩

It was quite the turnaround, but then I was determined to make it so after dragging my poor dad all the way to Margate for a bit of a non-event! The next show HAD to go well for his sake… and I also wanted a happy ending for my vlog!

LACK OF SUPPORT FROM FRIENDS OR FAMILY

Did you know that lack of support from friends or family is more often than not, simply a form of fear that they are projecting onto you?

Despite having the best day on Sunday, and bringing those trophies home, the day actually ended in upset and a full-blown row with my mum who is not in support of any of it!

Now, if you watch the YouTube video then you’ll realise the mistake I made was that I Iost perspective that evening  (which I’ve let myself off for as I was BUZZING with joy!)  and succumbed to a game of manipulation which of course ended in resentment, and frustration, for both parties….and an almighty argument – door slamming, dramatic exit, the lot!

We met up first thing on Monday morning to talk things through but it really boils down to her lack of understanding as to why I do what I do, as well as fear for my wellbeing… which is understandable.

She’s not quite fully on board but there is a bit more understanding there now and while we still have some way to go, it’s definitely a work in progress.

But the reason I’m sharing this with you this week is that I know I’m not the only one who has come up against a feeling of lack of support from friends and family, it’s a very common thing that I hear from clients all the time.

So if you ever have experienced (or maybe you’re experiencing it now) a lack of acceptance, or a feeling of judgment that’s really bringing you down because it’s coming from those that are most important to you, then this episode is for you! 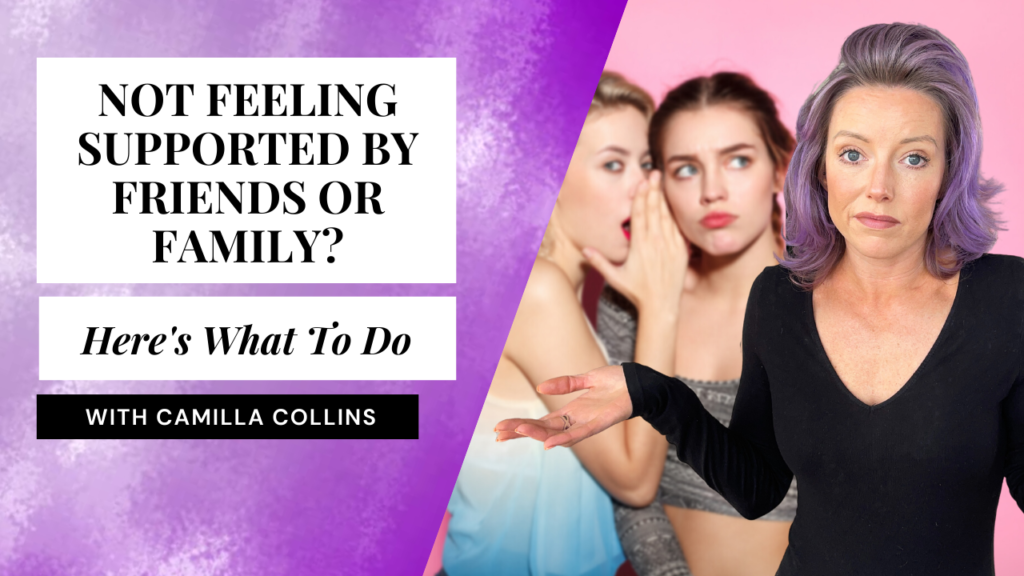 Most of us have experienced a time in our lives where we feel unsupported by partners, family members, friends, or coworkers.

Not receiving respect or support from those who we love the most can be the hardest to deal with.

You may feel unsupported with a relationship, a career, starting your business… or maybe just your whole way of life.

Over the 33 years that I have been on this planet, I’ve had to deal with a lack of support in different areas, but the area I have perhaps come up against it the most is within my career; and this has come not only from friends and family but also near strangers!

Lack of support nearly always stems from a form of fear within the other person which they are projecting onto you.

Of course there are exceptions to the rule, but when family and friends don’t support you it’s not necessarily because they don’t want the best for you (or are going out of their way to make your life difficult) it’s because they don’t understand – Or what you are doing isn’t aligned with their values or beliefs.

Working for myself nearly all my adult life has been rather unconventional to the majority of people around me, and going against the grain and doing something different can make people uneasy. Most of the resistance I experienced from others was coming from a place of love and care for my wellbeing, and not intentional sabotage on my life and everything that I wanted for it.

I lacked support in my choice to be a makeup artist – because there were a lot of people who don’t perceive that to be a real, or worthwhile, job – and also very much so with personal development and my coaching work.

I’ve been made fun of and talked down to, and it’s upsetting and frustrating as hell, And there have been times when I’ve nearly given up and just conformed. But I didn’t and I can tell you that there ain’t many people laughing at me now.

The real danger that lack of support from those you respect and look up to presents is that it makes you doubt yourself and your abilities. And if self-doubt gets a look in then it can take hold of you and spread like wildfire.

So, how do you turn a blind eye to the lack of support you are receiving?

How do you bat off unhelpful or snidey remarks or comments?

How do you stop yourself from adopting others’ beliefs and conforming to society’s norms?

You get to work on yourself!

But before that, the first step is understanding.

We have a basic human need for connection – you will want to feel connected to others and they will want to feel connected to you. If you and the other person (or people) are not aligned in beliefs then it’s likely that a game of manipulation will ensue. And it works both ways. The trick is to not start playing this game at all – it just ends up in frustration, resentment, and full-blown rows.

You need to keep perspective around it all. And a little exercise that may help you, is to think about some of the things that you have pre-conceived ideas or beliefs about that others may not believe the same, or agree with you on.  If you can understand it within yourself then it’s easier to understand with others – this is all about being open-minded.

BUT, do not try to educate people with words or by force, instead, educate them by example, lead by your actions – they will come around.

Their unsupportive words or actions are likely stemming from fear, and so, the only way that you are going to remove that fear and enable them to support you is by proving that it’s safe for them to do so, by providing them with proof.

But hold on, that is going to be very difficult to do off your own back if all you are surrounded by is people that don’t believe in you and your capabilities.

Remember that self-doubt that I mentioned earlier, well if that’s got a hold on you then you’re going to need the help of some other people to get out of it.

We can very easily adopt the beliefs of the people that we surround ourselves by – if you’re surrounded by people that don’t support you and don’t believe in you then you’re not going to get very far.

So you need to cultivate for yourself a supportive network of people who are aligned with your passions and values, and who have similar goals to you. This doesn’t mean you need to drop your friends and family at all, you just need to look at the ratio of the people you are spending your time with.

So take inventory of who you see on a regular basis each week and how often you see them.

Imagine seeing 6 different people each week (they could be friends, family, coworkers…) and you see them each for an equal amount of time – say or a coffee or a lunch together.

And 4 of those people aren’t supportive of your thoughts and ideas – so you have to be careful what you say when you’re with them, and perhaps some topics off-limits to avoid an argument.

And then there are the 2 people that totally get you, and you have great chats with, and they get you all motivated and fired up.

If you’re seeing these 6 people for the same amount of time each week, who is going to win over you mindset in that week?

So you’ve got 2 options here.. you can add more supportive people into your network so you are seeing more of those people each week.  Or. You can play with your time exposure to the network that you already have.

So if you currently see each person for an hour each week then you could see the unsupportive people for 30 minutes and the supportive people 2 hours each time which will have you feeling much more supported to crack on with whatever amazing stuff you want to do – when you break it down and create a strategy around it, it’s so much easier!

Remember, people need proof and tangible things to believe in.

They will come around to your way of thinking the more you keep doing what you’re doing, creating success for yourself, and also normalising your behaviour in their eyes.

We are all complex creatures, and you don’t know what other people have experienced in the past or are going through in the present, as well as what beliefs they may be carrying – and potentially projecting onto you.

And if you’re not a therapist or a coach then it’s none of your business.

Do what you need to do for you.

Create more support with what you’ve got, and lead by example.

0 thoughts on "Handling Lack of Support from Friends or Family"

Your email address will not be published. Required fields are marked *

How To Stay Focused And Avoid Distractions From The Masses